Air Sealing Before & After Photos

Athens, PA Why is air sealing so important? 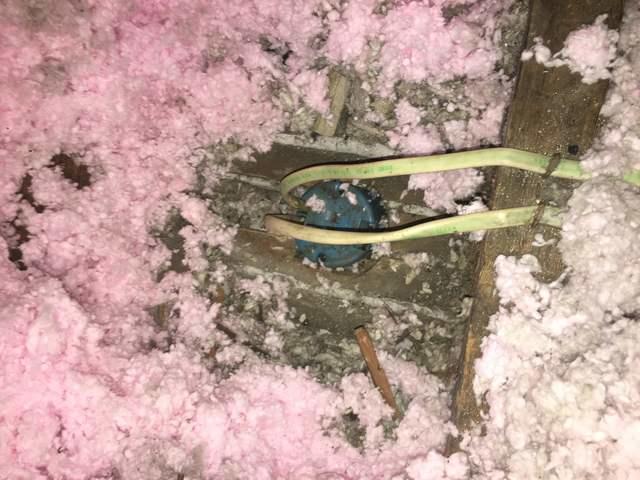 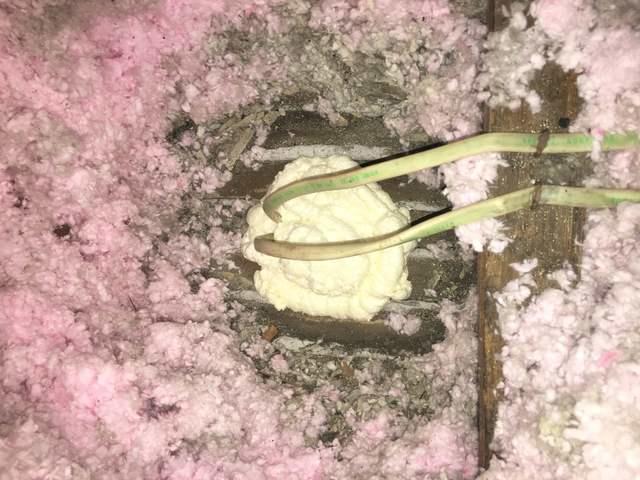 Since attics are vented, we should think of them thermally as outside in the winter. Because of the suns radiant heat in the summer, they are much worse than outside, reaching 140 degrees on the summer days. Clearly, we need to keep an absolute boundary between our living space and the attic so inside air doesn't move to the attic in the heating season, and heat doesn't pass up through our ceilings in winter, and down from our ceilings in the hot summer. To reduce overall air leakage, the attic is the first priority because warm air rises to the top of the house and finds any and all holes to leak out into the cold vented attic and is lost. Holes, gaps and joints include between drywall and framing at the top of walls, around pipes, wires, chimneys, electric boxes, fixtures, ducts, ceiling grilles and joints in framing. The reason cold air leaks in from the outside into the lower levels of the house is that warm air (the air you pay to heat in the winter) leaked out of the top and created a suction at the bottom. Attics are dramatically under-insulated compared to today's standards.

Adding insulation in an attic without sealing all air leaks first should never be done, because you are burying air leaks and making them impossible to seal later - and fiberglass insulation DOES NOT STOP air leaks. That's why Foam It Insulation first carefully air seals the many various points where air from your home leaks up into your attic and is lost. We use expanding foam, boards, caulk, and metal flashing and fire caulk around your masonry or metal chimney as appropriate. If necessary, baffles are installed in each rafter bay to keep soffit vents clear and prepare for insulation. Finally, our premium TruSoft cellulose insulation is blown to the optimum R-value. TruSoft will not burn, get moldy, or attract pests. Blown insulation fills all gaps and odd shaped voids, and by filling over framing members, thermal bridging is avoided. 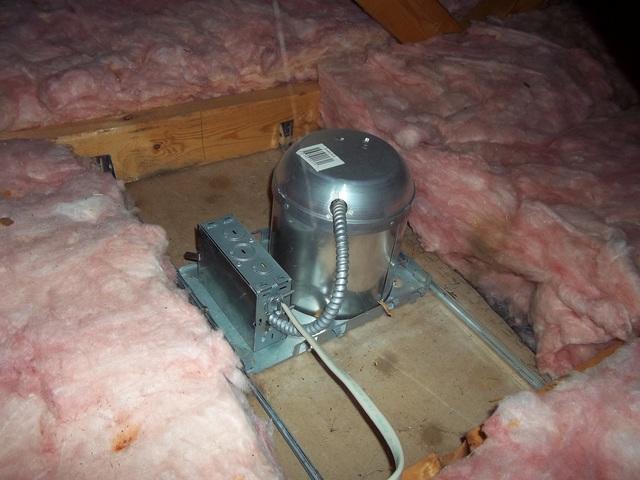 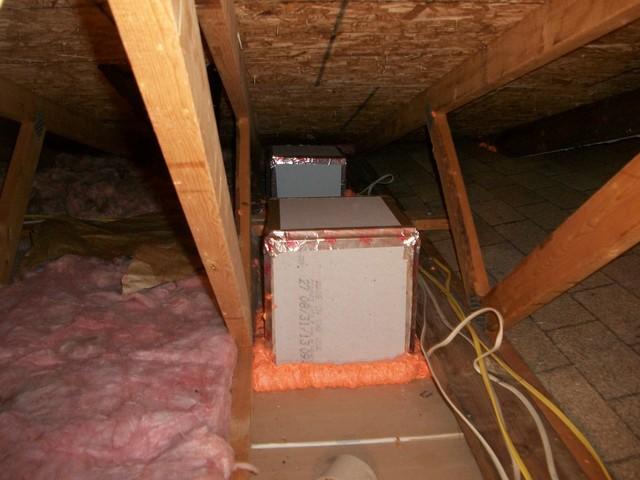 Can lights and ceiling fans can be a major source of conditioned air leakage in the home. This can be remedied by installing and sealing a cover which also separates their moving parts and wiring from the TruSoft insulation. 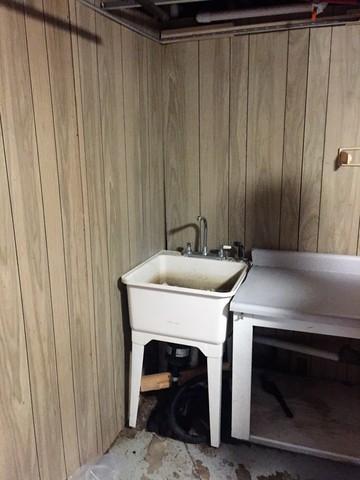 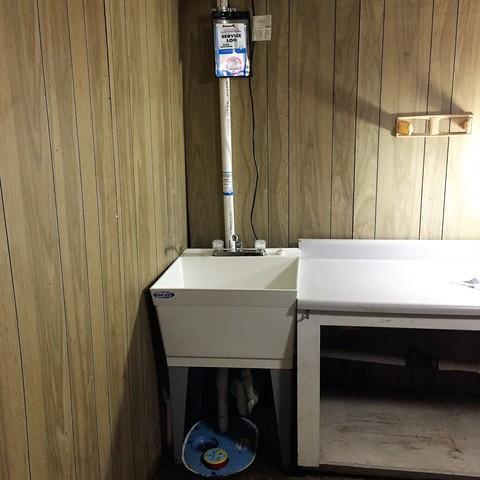 When you're having moisture issues we can fix them! We not only insulated this customer's home but we also installed a super sump system for him so he no longer has water problems. The water in this basement now goes in to this sump pump as opposed to being stagnant puddles throughout the basement floor, and the sump pump takes it outside. 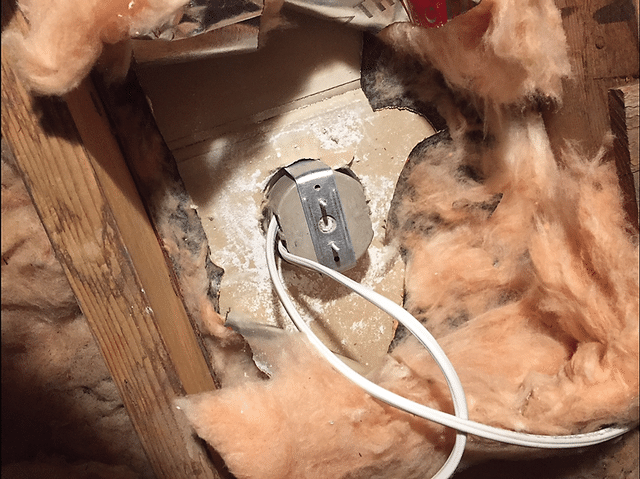 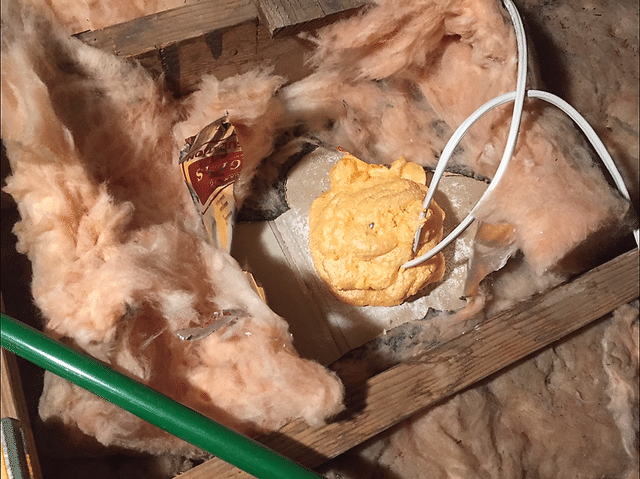 This very leaky attic was costing the homeowner a lot of money when it comes to the energy bills. It's surprising to learn can lights are a top problem in uneven temperatures in most homes. The best way that we could help them out was to air seal and insulate their attic using spray foam insulation and SilverGlo. 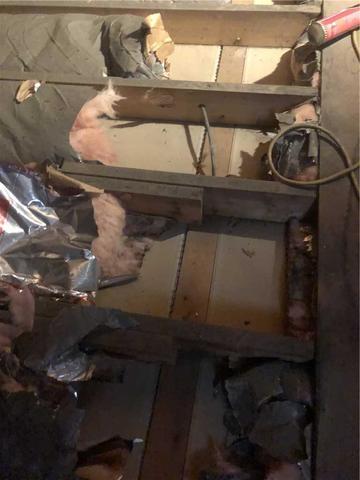 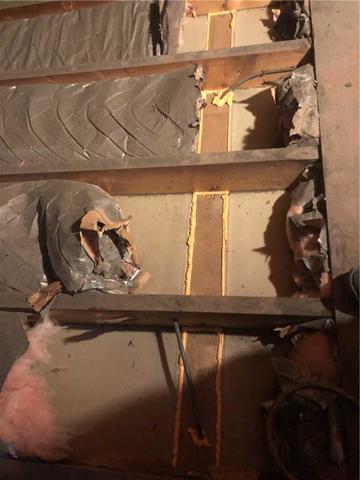 While working on this attic in Binghamton, NY; our crew here at Foam It Insulation takes great care to seal many of the place air escapes into that many others don't think of sealing, such as can and recessed lighting fixtures, as well as top plates in the ceiling. Before insulating the attic with our TruSoft blown cellulose insulation, we ensured the attic was tightly sealed by sealing the rim joists as well as top plates.